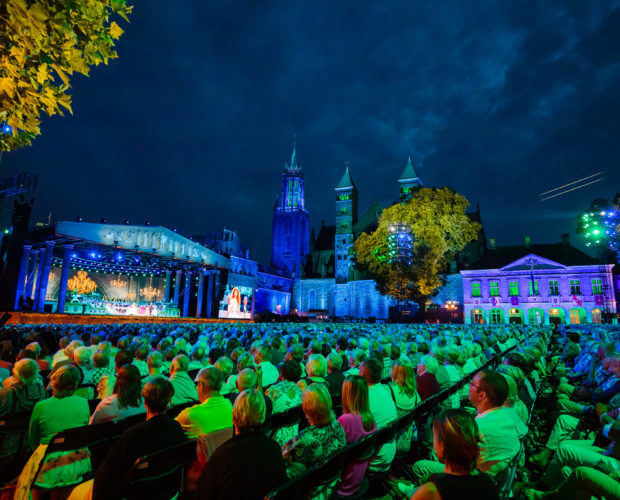 Dutch LD Maurice Verbeek incorporated an impressive amount of CLF Ares, Ares XS and Yara in his design. A large quantity was used to lighten up the 38 national monuments which are surrounding the area of the Vrijthof, in Maastricht, Netherlands.

The design is based on creating a total experience for the audience. ‘André wants to give the audience an unforgettable evening. He wants people to laugh, enjoy and dance’, says Maurice Verbeek. ‘By not only lighting the stage, but also the audience and the scenery an interaction occurs between all attendees. Light is, just like music, a way of communicating. I try to create an atmosphere which matches the music by using colors and nuances.’

Verbeek used to design with discharge fixtures because of their white balance. At the same time these fixtures do not provide enough output when using saturated colors which was a problem for TV registrations. ‘The CLF Ares became a very good replacement because of the high output. Besides that, the 21° beam angle is very suitable for long distances. Furthermore I like the Smart Filter System, which gives me the opportunity to change lenses on site. I also use the barndoors, in order to prevent the audience being blinded.’

During the 2017 concerts all surrounding monuments were illuminated by the CLF Ares. Also, the on-stage decoration was taken care off by the powerful and narrow beams of the CLF Yara. Both fixtures were chosen after an extensive shootout by Verbeek. ‘The CLF fixtures are the most powerful on the market, but extra features like the filter system and the included barndoors were decisive.’

Maurice Verbeek has been working as LD for more than 24 years. Since 21 years Verbeek has been working for André Rieu. The first designs were made in 1996, the year of Rieu’s breakthrough with the ‘Second Waltz’. Since then the concerts were getting bigger and the orchestra grew from 12 to 50 musicians. Verbeek evolved with this growth and got the change to keep up with the fast development of entertainment lighting.