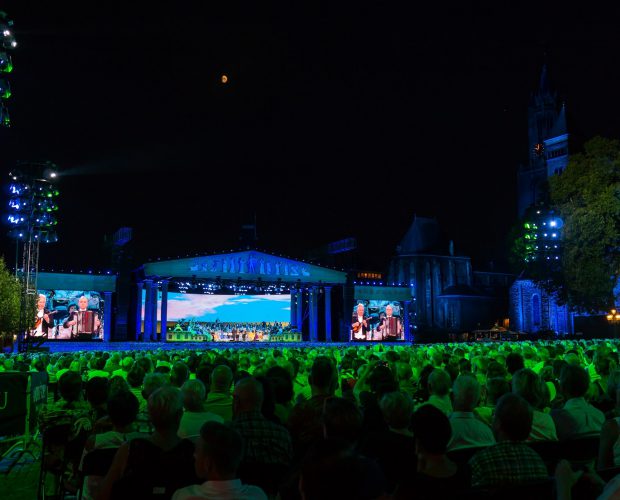 Maurice Verbeek used the LEDbar PRO to illuminate the lower part of the stage. During previous editions conventional striplights were used for this purpose. Verbeek: ‘We didn’t have a powerful linear RGBW LED fixture who could keep up with the rest of the rig that time. Therefore I was very happy when I saw the LEDbar PRO for the first time. The output is impressive, the color mixing is beautiful and the 24° beam angle is useful.’

Verbeek continued: ‘Andre Rieu wants to create an interactive experience in which everything is illuminated.’ In order to establish a unique atmosphere, everything on the 2200sqm Vrijthof area needs to be illuminated. ‘Additionally, camera registration makes it also necessary to have everything lightened up equally, including audience and the monuments surrounding the area. By using different colors and nuances I try to create an ambience that seamlessly matches the music.’

Following last year’s concerts, all surrounding monuments were illuminated by the CLF Ares. Also, the on-stage decoration was taken care off by the powerful and narrow beams of the CLF Yara. ‘CLF fixtures are the most powerful on the market. I’m satisfied with their performance, just like the DVD registration team’, concludes Verbeek.

Maurice Verbeek has been working as LD for more than 24 years and has its own company: www.verbeeklichtontwerp.com. Since 22 years Verbeek has been working for André Rieu. The first designs were made in 1996, the year of Rieu’s breakthrough with the ‘Second Waltz’. Since then the concerts were getting bigger and the orchestra grew from 12 to 50 musicians. Verbeek evolved with this growth and got the change to keep up with the fast development of entertainment lighting.

The LEDbar PRO is a multifunctional linear RGBW LED batten. Because of the 24° beam angle it can be used as cyclorama as well as pixel controlled effect machine. 10 Big individually controllable high power RGBW LEDs deliver a rich color set and smooth HD dimming.

All fixtures were supplied by leading Dutch dry-hire company Rent-All.